Nuvision Heroes: A Vietnam Navy veteran who continues his family’s legacy of service to his country 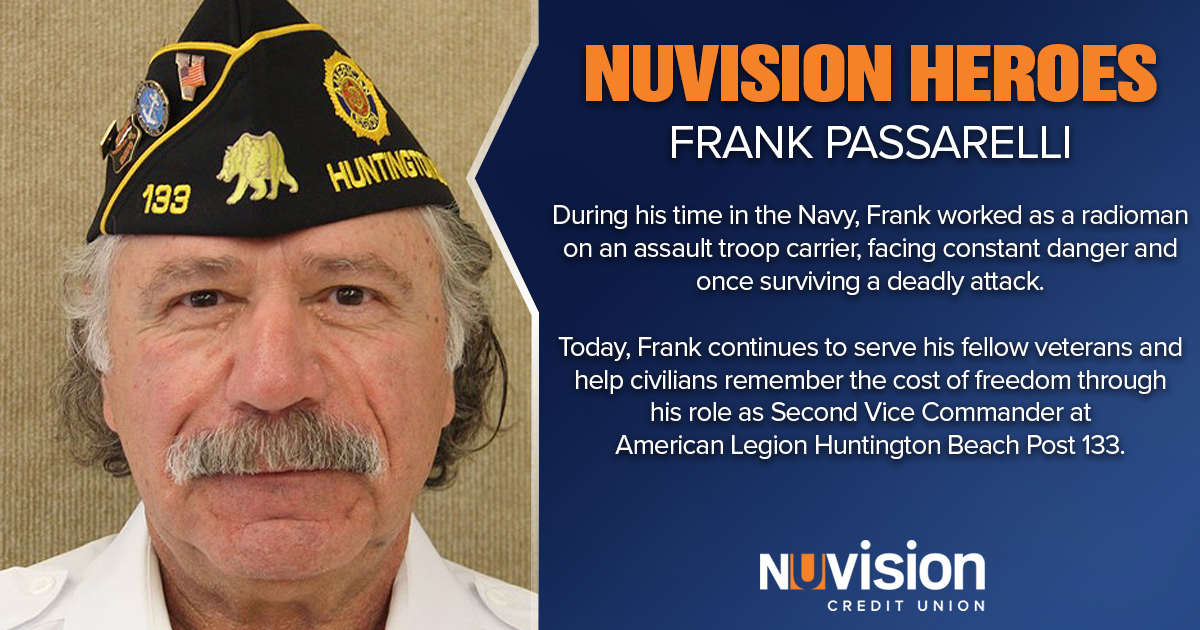 Frank Passarelli grew up with five Navy veterans in the family, his uncles, who had all served during World War II.

“They were all in the South Pacific at the same time, but they weren’t all on the same ship,” he said. “One uncle worked on an amphibious ship. My other uncle was [on] a destroyer. My other one was land-based.”

When Frank joined the military during the Vietnam War, his choice was clear. After serving one year as a Reservist, he spent two years on active duty in the Navy.

During his time in the Navy, Frank faced constant danger and survived a deadly attack. Today, he continues to serve his fellow veterans and help civilians remember the cost of freedom through his role as Second Vice Commander at American Legion Huntington Beach Post 133. That’s why we chose Frank as this month’s Nuvision hero.

Daily trials and painful losses are the prices of freedom.

Frank was a radioman on an assault troop carrier, which brought troops to the field through canals, reaching places the helicopters couldn’t go. He worked with the Mobile Riverine Force, part of the 9th Infantry Army, and the Navy’s River Assault Squadron 15.

‘Other veterans understand what we went through, whereas a civilian doesn’t.’

Returning home after the war, some military jobs just don’t transfer to civilian life. As a radioman, a gunner, and an engineman on a ship, Frank’s job was one of them. “I couldn’t go to my job,” he said.

Forming friendships with other veterans can help alleviate those difficulties. That’s what happened when Frank joined the American Legion fifteen years ago.

“You can talk to a civilian about something, and they look at you like you’re from Jupiter or something,” he said. “But you talk to another veteran, and they understand perfectly what you’re talking about.”

When he joined, Frank had been wanting to get into volunteer work. The American Legion fulfilled that desire.

Now, Frank is a service officer and Second Vice Commander at his post. They reach out to the community often through events like the 4th of July parade, a Veterans Day ceremony on the pier, a Memorial Day ceremony, and a 9/11 ceremony.

“You build a good camaraderie with your fellow veterans,” he said. “We have a very good post.”

Nuvision is grateful to work with the American Legion for our upcoming Veteran’s Day Appreciation Breakfast. We’re excited to honor Frank at this event and welcome many other veterans from the community as we thank them for their service.

Frank, thank you for your sacrifices and many years of helping local veterans find meaning and community.